Concrete, ceramics and glass all have a relatively high thermal mass. Thermal mass imparts benefits to the thermal efficiency of a structure; this is what we’ll be looking at today.

This is important because thermal mass is a property that enables building materials to absorb, store, and later release significant amount of heat. For example, if a stone is sitting out in the sun all day, it will collect heat from the sun and remain warm for some time after the sun goes down (and everything around it cools off) owing to the high specific heat of the stone.

Here is a good discussion of thermal mass benefits of concrete, taken from this article.

“Buildings constructed of concrete and masonry have a unique energy-saving advantage because of their inherent thermal mass. These materials absorb energy slowly and hold it for much longer periods of time than do less massive materials. This delays and reduces heat transfer through a thermal mass building component, leading to three important results.

1. There are fewer spikes in the heating and cooling requirements, since mass slows the response time and moderates indoor temperature fluctuations.

2. A massive building uses less energy than a similar low mass building due to the reduced heat transfer through the massive elements.

3. Thermal mass can shift energy demand to off-peak time periods when utility rates are lower. Since power plants are designed to provide power at peak loads, shifting the peak load can reduce the number of power plants required.
The thermal mass of concrete has the following benefits and characteristics:

Reduces total loads in many climates and locations

Works best when mass is exposed on the inside surface

Works well regardless of the placement of mass 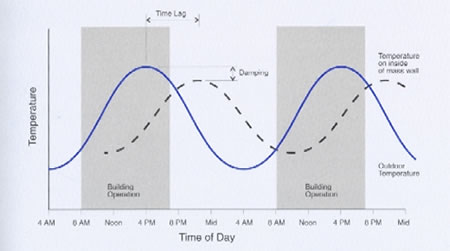 Mass works well in commercial applications by delaying the peak summer load, which generally occurs around 3:00 pm to later when offices begin to close. As a case in point, the blackout in the Northeast in August 2003 occurred at 3:05 pm. A shift in peak load would have helped alleviate the demand and possibly alleviated this peak power problem.
Damping and lag effect of thermal mass

The ASHRAE Standard 90.1–Energy Standard for Buildings Except Low-Rise Residential Buildings, the International Energy Conservation Code, and most other energy codes recognize the benefits of thermal mass and require less insulation for mass walls.

In some climates, thermal mass buildings have better thermal performance than low mass buildings, regardless of the level of insulation in the low mass building. The most energy is saved when significant reversals in heat flow occur within a wall during the day. So, mass has the greatest benefit in climates with large daily temperature fluctuations above and below the balance point of the building (55 to 65°F). For these conditions, the mass can be cooled by natural ventilation during the night, and then be allowed to absorb heat or "float" during the warmer day. When outdoor temperatures are at their peak, the inside of the building remains cool, because the heat has not yet penetrated the mass. Although few climates are this ideal, thermal mass in building envelopes will still improve the performance in most climates. Often, the benefits are greater during spring and fall, when conditions most closely approximate the "ideal" climate described above. In heating-dominated climates, thermal mass can be used to effectively collect and store solar gains or to store heat provided by the mechanical system to allow it to operate at off-peak hours.

Thermal resistance (R-values) and thermal transmittance (U-factors) do not take into account the effects of thermal mass, and by themselves, are inadequate in describing the heat transfer properties of construction assemblies with significant amounts of thermal mass. Only computer programs such as DOE-2 and EnergyPlus that take into account hourly heat transfer on an annual basis are adequate in determining energy loss in buildings with mass walls and roofs. The heat flow through the wall is dependent on the materials’ unit weight (density), thermal conductivity, and specific heat.
Specific heat is defined as the amount of heat energy (in Btu) required to raise the temperature of one pound of a material by one degree Fahrenheit. Specific heat describes a material's ability to store heat energy. The specific heat of concrete and masonry can generally be assumed to be 0.2Btu/lb•°F. (ASHRAE Handbook of Fundamentals, 2005)

Heat Capacity (HC) is the amount of heat energy required to raise the temperature of a mass one degree Fahrenheit. Heat capacity is per square foot of wall area (Btu/ft2•°F) and includes all layers in a wall. For a single layer wall, HC is calculated by multiplying the density of the material times its thickness (in ft) times the specific heat of the material. HC for a multilayered wall is the sum of the heat capacities for each layer.

Values of heat capacity, thermal resistance, and thermal transmittance for concrete and masonry are presented in Appendix A of ASHRAE Standard 90.1-2004. Thermal conductivities are presented in the ASHRAE Handbook of Fundamentals.”

It should be noted that thermal mass benefits are maximized when a concrete structure is insulated on the outside. This helps store and retain heat in the thermal mass of the building. The structures I’ve built used blue-board (a type of Styrofoam) on the outside of the concrete. This blue-board was then clad with a simple wooden board & batten; any other material could also be used (clapboard, shingles, siding, etc.). Insulating the inside of the building prevents the full benefits of thermal mass from being realized, because the concrete is prevented from absorbing and releasing heat to the inside of the structure.

The thermal mass benefits of concrete result in a much more thermally efficient structure which requires significantly less energy to heat and cool. My own structures stay warm in the winter and cool in the summer, it is really quite noticeable, and my utility bills stay quite low.
Posted by Peter Roberts at 7:35 AM