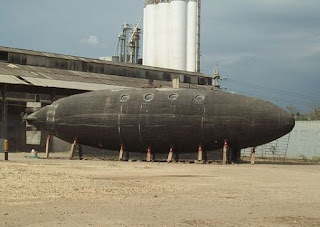 Something less far-fetched than a masonry submarine is the idea of a masonry ship, or boat, or barge.  I've written previously on a national competition that occurs in the US between various engineering schools to design, make and race concrete canoes. The ASCE (American Society of Civil Engineers) sponsors the annual Concrete Canoe National Competition as an engaging, fun and interesting exercise for engineering students to become involved in the design and use of concrete as a material to be used in boats, as canoes.  This is an idea whose use is well established and known, although the general public may not be fully aware of this. 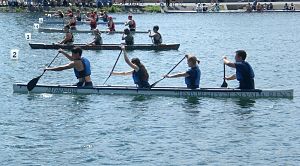 The idea for concrete boats has been around for over 150 years now.  The oldest known ferrocement boat was a dinghy built by Joseph-Louis Lambot in Southern France in 1848.  In the 1890's concrete ships, boats and barges were designed and built by an Italian, Carlo Gabellini.  Concrete boats were practically common during both World Wars.  They were made partly in response to the war's demand for steel, because a concrete boat does not have a steel hull. 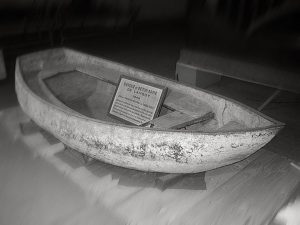 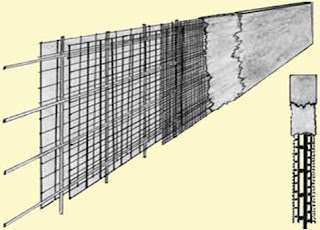 The difficulty with a ferrocement boat is that eventually micro-cracks will form in the concrete matrix.  Water will migrate and travel through these cracks until it reaches the metal grid located within the concrete.  Of course the metal will then rust: it expands as it rusts, widening the crack, allowing more water in, creating more rust, further widening the cracks, etc., until the boat's hull does not maintain structural integrity.  Nonetheless, concrete ships are known to have lasted over a century; such as the Violette built in 1917 and now serving as a boating clubhouse on the Medway River in England.  There are also concrete barges on the Erie Canal in New York State, which were also built around 1917. 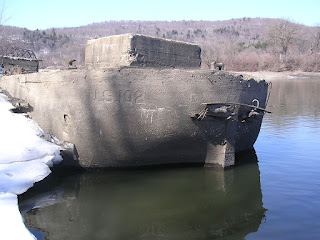 I had been thinking about concrete ships, boats, barges, submarines and similar applications for several years.  In the course of doing work which is funded by the National Science Foundation (NSF Award #1660075, "Topological interlocking manufactured concrete block") I was made aware of another start-up company, also funded by NSF, called "Neuvokas." Neuvokas makes a reinforcement bar ('rebar') by melting basalt, a high-density rock common around the planet, and drawing it into fibers (like fiberglass) and then epoxying those fibers together into a rod.  The resulting material is very lightweight, has a higher tensile strength than steel, and (very importantly) it never rusts.  I have been using gatorbar in my masonry system, to build arches and domes and even flying buttresses.  It works very well, is cost competitive with steel rebar, and again: does not rust. Below is a picture of one of my arches, being made with gatorbar.  Further below is a schematic of these same block making the hull of a ship (FIG. 16), and rebar configuration (FIG. 17).  The corrugations created by the herringbone block pattern provide additional flexural rigidity to the hull, making it stronger. 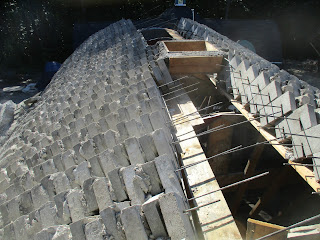 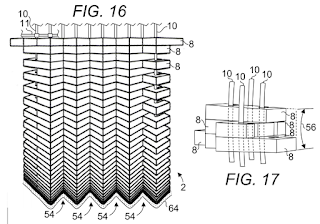 It occurred to me that the masonry system my company is developing would be suitable for making the hull of a concrete ship. Simply take a masonry arch, and turn it upside-down, and you have the hull of a ship.  In order to provide additional strength to the hull, a series of bulkheads are located across the beam of the hull, in which rebar is located, to provide tensile strength across the hull.  Compressive strength is also created by these bulkheads.  The bulkheads are made by simply using regular, rectangular concrete block. In one embodiment (shown below) the design uses a traditional 3 centered arch, but inverted; this should make for a more stable boat than a simple cylinder or inverted barrel vault. A waterproof coating can be applied to both exterior and interior surfaces.  The vessel is also divided into a series of watertight compartments.  Flotation foam can also be included into the compartments.  All of these features create redundant safety factors into a ship made of concrete block. 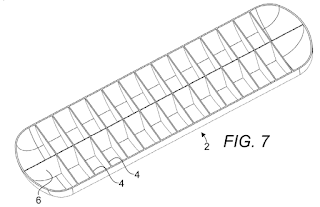 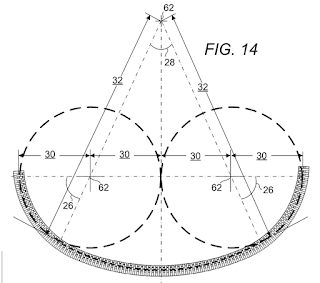 By using a material such as gatorbar, reinforcement can be provided which will never rust.  This creates an ideal ship hull.  A ship's hull can be made very inexpensively, it can be made virtually any size, it will never rust, it will never grow barnacles, it never needs to be painted, it would never need drydock repairs.  After doing some research, I realized that no one else had really done this sort of work, or idea, or boat: a vessel whose hull is made from manufactured concrete block.  By using the arch block design (discussed here on this blog) this design also takes advantage of the anisotropic nature of manufactured concrete block.  That is, manufactured block has a high-strength axis, and this high-strength axis is always oriented radially outward, imparting its maximum strength qualities into the ship. The bulkheads simply use regular rectangular concrete block, with vertical and horizontal rebar (gatorbar). 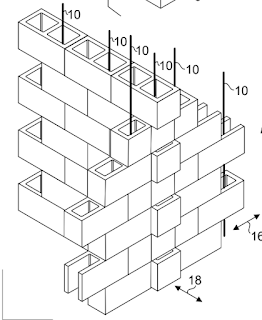 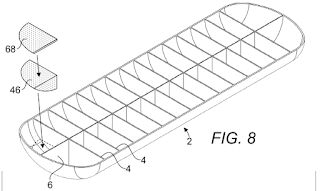 A new US patent application was recently filed by my company, simply entitled "Floating base." This patent application includes students from the Senior Project class I taught at Alfred University's Inamori School of Engineering, namely: Benjamin Cleaver, Matthew Freitag, Ryan Miller, Charles ('Addison') Heulitt; under the direction of  their professor Dr. Ehsan Ghotbi, and my employee Stephen Bonan (good job guys!). It appears as though this field of invention is wide open, that none have really tried what my company is attempting here.  It will take us some time to prove this idea by actually building and testing a large concrete ship, but this appears very practical, affordable, and looks as though it would create a ship superior to conventional steel-hulled ships or wooden ships in terms of cost, maintenance, life-cycle, and so on.  Shown below is an artist's conception of our concrete block hulled ship, used as a platform for residential housing.  The future looks buoyant for ships made from concrete block. 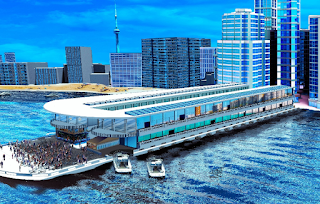 Posted by Peter Roberts at 8:55 AM