How it all began

I have been working on using manufactured concrete block to make roofs, including domes, arches, spheres, flying buttresses and more, for around 27 years now.  Today I'm taking a look back at how this all began.  I am prompted to do this by some old photographs which a friend (Paul Sofinski) recently shared on facebook from many years ago, when I was studying ceramic engineering and ceramic art at Alfred University's New York State College of Ceramics.

As a child I was fortunate to live in Europe, where my father was on sabbatical as a professor of European history.  My siblings and I were dragged into many of the great cathedrals of Europe, where I would stare in awe at these wonders of masonry.  A seed had been planted in my young mind.

I began doing pottery in high school.  I went to Guilderland Central High School in Guilderland, New York.  I was fortunate enough to have Mr. Paul Krauss as a ceramic art teacher.  Under his tutelage I began working on the potter's wheel and spent a few years after high school making and selling my work. I attended the University at Albany in the early 1980's, where I studied geology and in my spare time made and sold pottery at the university's campus center.

Some years later I decided to attend Alfred University.  I initially went there to study ceramic engineering, but once I saw their art facilities, I decided to pursue art also.  I was looking for a more challenging aspect of art to investigate, so my work became large in scale.

Here are some pictures of me and this early student work.  I would use a forklift to move these pots around, to get them in and out of the kiln, etc. 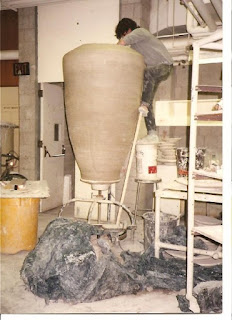 This became interesting from an engineering perspective.  These pots at first were anthropomorphic, being human in scale and proportion; having a foot, a shoulder, a neck, and so on.  This quickly transformed into their becoming architectural, and soon I was contemplating the notion of a ceramic house.  I combined my ceramic art and ceramic engineering studies at Alfred, and obtained a custom degree in Masonry Science. 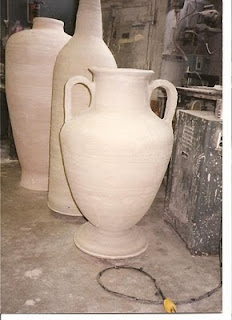 I researched ceramic houses, and investigated the work of Nader Khalili, Paolo Soleri, Bucky Fuller, and others.  Nobody was doing what I was thinking about.  My approach seemed obvious, self-evident and simple.  I wanted to use common concrete block technology (usually called a "cinder block") to make roofs, in the form of arches and domes. I sought to combine the high efficiency and very low cost of concrete block automated production with the high compressive strength and design flexibility which symmetry and geometry make possible. I was shocked to learn that this had never been really attempted.  It seemed like an interesting and unique opportunity, so I pursued it. 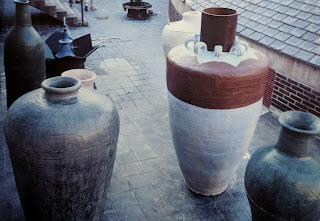 It takes a naive young person to try something new!  I was that sort (still am, to a degree).  I encountered the extremely conservative construction industry, and the even more conservative practice of masonry.  Over the years that followed, I have worked and produced designs, buildings, molds, blocks, patents, and done my best to try and demonstrate my ideas within my limited economic means (it is expensive to try and change a global industry by one's self).  My work has gained some recognition and has garnered interest nationally and globally.  Currently I am completing my third funded award from the National Science Foundation, wherein I am seeking to gain a positive evaluation report from the International Code Council - Evaluation Services.  This will allow this technology to be sold as a product globally. It all began with an art student making big pots.  Now cut your hair and get a real job! 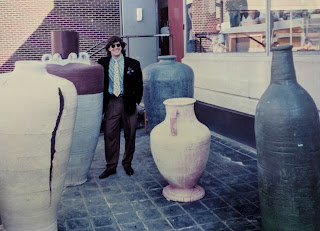 Posted by Peter Roberts at 4:57 PM